News
You are here: Home / News / Noticias @en / France in the spotlight of international tourists 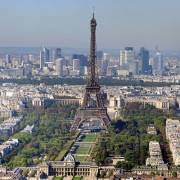 France is receiving tourists as never before, is expected to exceed 85 million this year.

France tourism has grown exponentially this year. In the first quarter has increased 3.6 percent for foreign visitors, this increase is measured in overnight stays by tourists during a given period.

The hotel mode was the preferred in the second quarter, has increased 2.3%, settling this most exploited form com in France.

In Normandy, tourism officials estimate that tourism will be better this year than last year, despite the fact that 2014 already hit a record with the 70th anniversary of the D-Day landings.

The news comes after the French government announced it is to set up a massive investment fund to boost the tourism industry, in a bid to attract 100 million visitors a year.