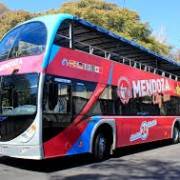 This year more than 5 thousand people traveled the most important points of interest of the city of Mendoza, in tourist bus, by Hop-on Hop-off type.

The “Hop-on Hop-off” system allows the user the option to have multiple stops and move up and down in each of them. Allows tourists to know the beauty surrounding, the village and may also see improvements in the Cerro de la Gloria, Gates Park, among others …

To find out what is being displayed, the buses have an audio guide in several languages ​​like Spanish, English and Portuguese and soon will be incorporated the German, French, Italian, Mandarin and Japanese for the entire journey.

The first half of February recorded an income of approximately 170 thousand tourists, generating a 70% hotel occupancy. These figures encourage further work, so more and more people use the tourist bus and other transportation systems of middle distance, to visit the city of Mendoza.

Mendoza City tour is the largest operator of the city. Offering high quality service and the ultimate experience for tourists