M&E keeps growing its market share on the multilingual systems business by equipping three new tourist trains for the city of Santa Cruz de Tenerife. ALSA, company with international experience and local operator Sierra y Gonzalez won the public tender for operating this service in the city, and has created CityView Tenerife.

This time Tenerife have chosen the M&E MTP08CM system with 16 channels to offer a complete service to the tourists who visits the island. The tourist train modality has grown in recent years, offering a closer and more accessible service to certain areas that the bus cannot access.  The M&E multilingual system will allow passengers to know all the information related to the city and be able to enjoy the wonderful views.

M&E offers the best systems on the market, differentiated by their reliability as well as their durability. Quality is always guaranteed, as well as after-sales service is an element of competitive advantage around the competition

Santa Cruz de Tenerife has started to operate its new tourist bus service on the island. It is a UTE with the powerful transport company ALSA and the local operator Sierra y Gonzalez. It is an operation with 6 tourist buses, which began to circulate at the beginning of the year 2018.

M&E Multimedia & Engineering has been the provider of multilingual systems for this operation. It is a new location for M & E that has consolidated its dominance position in Spain and has begun to obtain operations outside its area of influence. M&E has achieved a position of confidence as a provider of multilingual systems, with ALSA, given that the service and quality it offers is far superior to its competitors.

With the new systems that will be launched on the market in 2018, M & E will become the main supplier of multilingual systems worldwide, differentiating itself from the competition in a clear and forceful way. 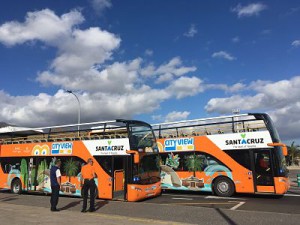 ALSA and Grupo Julià have inaugurated the new service of tourist buses in Marrakech, one hundred percent electric and free of emissions, after being awarded the tender called by the City Council for the management of this service for the next six years

Four new panoramic double-decker buses have been purchased for their start-up, which as a novelty are 100% electric and therefore do not generate emissions, thus adapting to the city’s environmental demands.

The service is expected to be used by more than 90,000 tourists a year. For its start-up, the UTE formed by Grupo Julià and ALSA has invested 1.8 million euros and created 20 direct and 200 indirect jobs.

ALSA has been present in Marrakech since 1999, managing urban transport and, subsequently, also that of its metropolitan area. In 2005, it launched the first tourist bus service in the city.

Grupo Julià is one of the main Spanish business groups specializing in global tourism and mobility services, and through its City Tour Worldwide division it has positioned itself as the second international tourist bus operator with a total displacement of more than four million passengers in 2016.