As every year City Sightseeing celebrates its private Annual Conference, where the franchisees and suppliers meet to exchange opinions and experiences.

As usual, M&E has participated in the event as a supplier of multilingual audio guide systems.  This year the company has introduced its new system, Smart Tourist Guide, based on the smartphone technology.

More than 120 franchisees participated in the event where they have been able to see the new multilingual system of the future. The feedback from the franchisees has been very positive praising the functionalities of the new system.

M&E currently works with many City Sightseeing franchisees as:

From M&E we would like to thank City Sightseeing for giving us the opportunity to work together and be able to offer the best service to its franchisees. 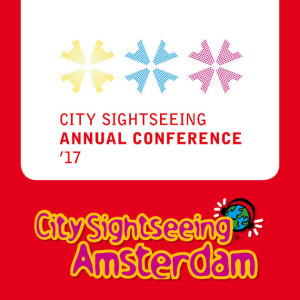 City Sightseeing continues to cross borders and opening branches around the world. The Spanish company has signed an agreement with the company Emirates to exploit the business model of City Sightseeing in Riyadh.

After opening a branch office in San Juan Puerto Rico, Riyadh is the next city to enjoy the famous red buses without roof, typical of cities like London, Paris, New York and many more. Nowadays City Sightseeing is present in more than 110 cities around the world and has established itself as the largest company in the sector.

City Sightseeing operates as a franchise and has about 3,400 employees. Its main headquarters are in London and Sevilla. Last year it counted more than 13 million travelers in more than one hundred destinations around the world and in 2016 plans to exceed these figures.

The modality of the tourist bus has grown exponentially the last decade, given the great acceptance in the market. The tourists see more comfortable being able to take a look of the city aboard the bus and be able to go down and up when they like it, not any other method of guided tourism.