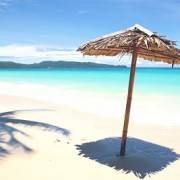 Tourism started strongly in 2016. International movements increased by 5.3% in the first quarter , according to the barometer of the World Tourism Organization ( OMT ).

The results are positive in almost all regions and many destinations have registered double-digit growth, worldwide has  been recorded 348 million trips , 18 million more than in the first four months of 2015 . If this trend continues , 2016 will be the seventh consecutive year that tourism grows above the average of 4 % estimated by UNWTO.

Only the Middle East suffers a setback

By region, Asia – Pacific carries the highest growth with an annual rate of 9%. It has been recorded in all subregions a positive variation of 7% or higher. The second largest increase is for Africa, which closed the quarter with 7 % more tourists than last year . And this despite the north of the continent , deeply affected by the terrorist threat, has suffered a decline of 8%

North America , meanwhile , experiences a year growth of 5%, while Central America and South America exceed 7% 2015 results. Europe, the world’s most visited region , grew by 4 % compared to the first quarter of 2015. Finally, international tourist arrivals to the Middle East fell by 7 %, according to the limited information available